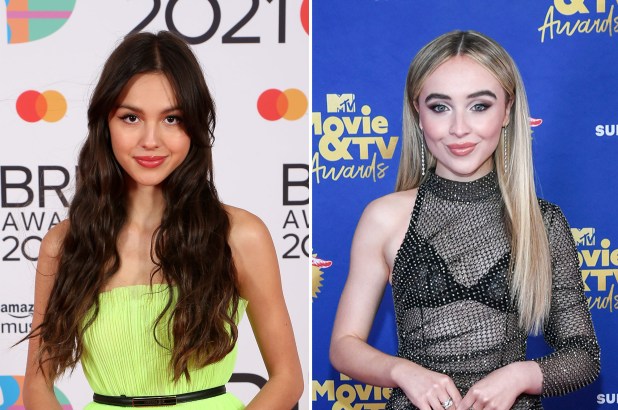 Olivia Rodrigo is not here for fans trying to pit her and Sabrina Carpenter against each other.

The “Sour” singer responded to fans who think that the lyrics to her hit single, “Drivers License,” are about the former Disney Channel starlet.

Rodrigo, 18, was profiled for Variety‘s Power of Young Hollywood issue where she touched upon the situation that followed after listeners heard the song.

Many fans believed that the lyrics were about the alleged relationship between her “High School Musical: The Musical: The Series” co-star Joshua Bassett and Carpenter, 22.

The lyrics in question said, “And you’re probably with that blonde girl/Who always made me doubt/She’s so much older than me/She’s everything I’m insecure about.”

Rodrigo explained to the outlet she wasn’t prepared for how much of a stir her lyrics would cause. “I put it out not knowing that it would get that reaction, so it was really strange [when] it did,” the “Good 4 U” rocker said. “I just remember [everyone being] so weird and speculative about stuff they had no idea about.”

“I don’t really subscribe to hating other women because of boys,” Rodrigo elaborated. “I think that’s so stupid, and I really resent that narrative that was being tossed around.”

She added how she forged a friendship with her music idol, Taylor Swift. “It’s so nice to be welcomed into the music industry and so great to be supportive of other women,” she said. “[Swift] wrote me a letter a while ago, and she wrote something about how you make your own luck in the world, and how you treat other people always comes back to you.”

Fellow Disney star Selena Gomez also crossed paths with Rodrigo. “I met Selena, and she was so kind,” Rodrigo said. “She talked to me a lot about prioritizing mental health, which I think is really important in this industry. All of us were in the limelight very young [and] that can be taxing on your psyche and can bring about all these weird issues.”